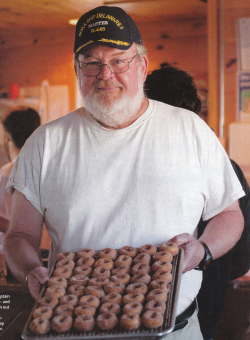 Jack McAdam lives in Springvale and owns McDougal Orchards with his wife, Ellen. The orchard has been operated within the family for eight generations. For the first 32 years of his professional career, Jack sailed on Fisheries Research Vessels. He started as Second Mate and worked his way up to Captain. He captained both the Delaware II and the Albatross IV.

The duties of captain prepared him well for the House of representatives. As captain, Jack’s focus was two fold: safety for the ship, crew, and scientists, as well as estimating, balancing, and sticking to his budget. Jack was responsible for dozens of lives and millions of dollars worth of equipment.

In April of 2005 he walked off the Albatross IV and by the end of the month had purchased his first donut machine. This became Captain Jack’s Donut Shack and his cider donuts quickly took off. Jack’s retirement has taken the laborious form of maintaining an apple orchard, but enjoys the work.

Two of Jack’s children live in Sanford and work on the orchard. He wants to represent them and all hard working Mainers in Augusta. Jack knows that the first step to protecting farms is protecting our planet, which is why his farm runs off of solar and biodiesel. The next step is to make sure our lands and businesses are protected under legislation.

Whether you live in the mountains, on the coastline, or somewhere in between, each and every Mainer has their own unique relationship with nature. I'll fight tooth and nail to make sure farmers, residents, and tourists can count on Maine's natural resources.

Maine was once a haven of agricultural growth. In Augusta, I'll see to it that Maine farmers are given a fair chance to make it on their own and contribute an invaluable resource to our community and economy.

Plain and simple: this system isn't working for Maine. As someone who has a 20KW solar system, I can say first hand that there are effective alternatives. Let's lower the cost of heating our homes and invest in a cleaner, cheaper future.

For ten years, Jack has been looking after the best interest of Sanford by overseeing the city's Master Plan and working with others in the town. He has also been involved in the Site Plan Review Committee.

Jack is a member of the NCC Board where he works to ensure our youth have the resources to thrive and be successful.

Before Sanford even became a certified city, Jack was ensuring the security and integrity of the elections in town.

Jack is also on the Board of Balch Lake Improvement Assoc. He has always, and will always, prioritize our natural resources and protect them.

For ten years, Jack represented farmers as their market manager. He was also on the board of the Maine Federation of Farmers' Markets.

Jack also found time in his schedule to be on the boards directed to help Sanford and York County that address and remedy issues pertaining to our young and our hungry. Community service has always, and will always, play a large roll in Jack' life.